Born onto Edgar’s Mission Farm Sanctuary, Dasher (middle) and his siblings will get to live a full and happy life. Their mother escaped from a pig farm, pregnant, with 8 tiny lives inside her. Had she not escaped, Dasher and his siblings would have been trucked to slaughter at just six months old.

In factory farms, mother pigs like Dasher’s are kept in metal crates so small they can’t turn around and can barely lie down.

If his mother had not escaped the farm, Dasher and his siblings would have undergone brutal mutilations such as having their teeth, tails and testicles cut — all without pain relief. Find out more about pig farming by watching the video below.

At just 30 days old, Autumn already carried the weight of an adult hen. Her underdeveloped legs could barely lift her massive body, and when she chirped you could hear she was only a baby. Like all “broiler chickens” — a term given to birds raised for slaughter — Autumn was born into a body that was designed to produce meat — not to sustain life.

‘Broiler chickens’ like Autumn are packed into filthy, overcrowded sheds and bred to grow so quickly that many suffer health defects, such as crippling leg disorders and heart attacks.

Inside the overcrowded factory farm she grew up in, many of her companions died from heart failure before they were even six weeks old. Her rescuers knew that she would not survive long, but unlike millions of ‘meat’ chickens before her, Autumn was spared the horror of a slaughterhouse. Instead, her final days were spent bathing in sunshine, eating watermelon and socialising with her best friend, Summer, at Lefty’s Place Sanctuary. Find out more about life for ‘meat’ chickens by watching the video below.

Batman is a gentle, friendly calf who was rescued from a dairy farm at just one day old. Now he lives at Freedom Hill Farm Sanctuary where he shares strong friendships with other rescued animals like him. The vast majority of male calves like Batman who are born onto a dairy farm are taken from their mothers and sent to a slaughterhouse within days of being born — so that their mothers’ milk can be bottled for human consumption.

Hundreds of thousands of male calves like Batman are killed as ‘waste products’ of the dairy industry every year.

Mother cows and calves have been known to cry out for hours and even days after being separated from one another. It’s likely that Batman’s mother, still on the dairy farm, would have been forcibly impregnated again, only to have her calf stolen from her in 9 months’ time. Find out more about how the dairy industry treats mothers and calves by watching the video below.

Popeye is a cheeky and adventurous young rooster, who is very lucky to have hatched at Lefty’s Place Sanctuary. He is fiercely independent, with a one-of-a-kind bond with his mother. If Popeye had been born into the egg industry, he would have been tossed into a mincing machine (alive) or gassed to death on his first day of life.

Male chicks like Popeye are killed as waste products of the egg industry.

This is the fate of millions of male chicks born into the egg industry every year. Since roosters don’t lay eggs, the egg industry sees them as ‘wastage’ – not as the unique individuals they are. Find out more about the egg industry’s darkest secret in the video below.

Little Miss Sunshine would come running when her name was called, loved learning tricks and even starred in a TV ad. But her life started very differently. Born only to produce eggs, she spent the first 18 months of her life confined to a wire cage. For most hens, the next stop would be the slaughterhouse. But thanks to the rescue efforts of Edgar’s Mission Farm Sanctuary, Little Miss Sunshine was given a chance to live the rest of her life to the fullest.

Most egg-laying hens are confined to barren wire cages for their entire lives, unable to seek privacy or express any of their natural behaviours.

For many egg-laying hens, the first time they see sunlight is when they’re crammed into crates and trucked to the slaughterhouse to be killed. Few ever see their second birthday. See the devastating reality for millions of individuals like Little Miss Sunshine in the video below. 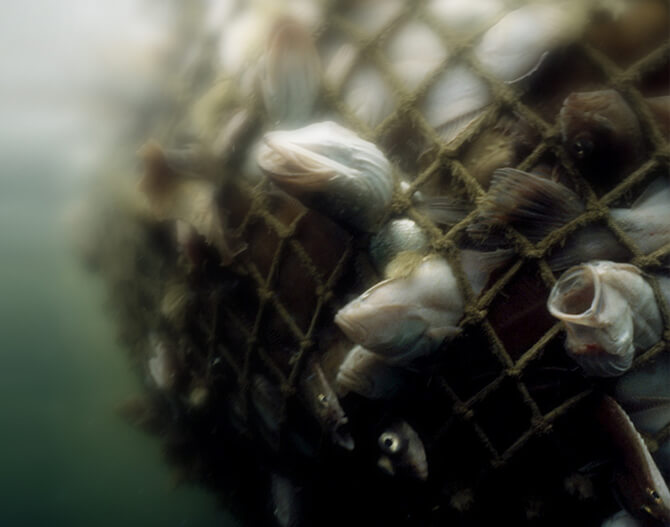 Fish have a lot more in common with us than many people think. Fish have been found to play and problem-solve, some species teach their young … and they feel pain.

When commercial fishing trawlers drag fish up from the ocean towards the water’s surface, the change in pressure causes their eyes to balloon out and often for their swimming bladder to explode. In their last moments, fish gasp and thrash their bodies, slowly suffocating.

And fish are not the only victims of commercial fishing. The enormous trawling nets catch everything in their path – including dolphins, turtles, sharks and other animals. In addition, discarded fishing nets left in the ocean, known as ‘ghost nets’, trap and kill hundreds of thousands more sea animals every year.

Fish in fish farms are sadly no better off. Confined to over-crowded, often disease-ridden pens, it’s hardly surprising that up to a quarter of fish in farms suffer from severe depression.

What about ‘humane’ meat?

While the small number of animals raised on small-scale farms may be a little better off than their counterparts on large-scale farms, even these animals may be separated from their families, and often suffer surgical procedures without pain relief. Ultimately both ‘factory farmed’ and ‘free range’ animals are trucked to the same slaughterhouses. Investigations have revealed terrifying fates await animals in Australian abattoirs.

Are ‘cage-free’ eggs a solution?

Almost anything is better than the nightmare of factory farming, but sadly, ‘cage-free’ doesn’t mean cruelty-free. The truth is that even on many ‘free range’ farms, hens spend most of their lives in crowded sheds and may have part of their sensitive beak cut off without pain relief. Across the entire egg industry – including free range and organic farms – chickens are killed from 18 months of age, when their egg production slows. And often, male chicks, who have no commercial value to the egg industry, are gassed or ground up alive on their first day of life.

Since we can live happy healthy lives without harming others, why on earth wouldn’t we?

Sorry. Not the choc chip kind! We use cookies on VegKit.com to gather information which lets us better tailor the site to your needs. By continuing to use our site you accept the Animals Australia cookie policy.